The second Xanth book is obviously a sequal 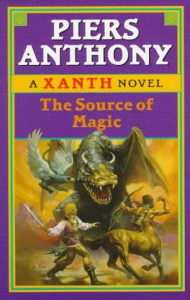 This book doesn't actually seem to be much at all. It is a sequel to Spell for Cameleon and the second in the Xanth series. It appears that the Xanth series probably should be read in order because, unlike Discworld, it appears that it moves around the same characters (though considering that this is only the second book in the series that is probably a pretty tough call). In this book Bink has discovered his magical power, which is deflecting spells targetted at him. This is probably why it appeared that Bink did not have any magical ability.

However, it seems that Anthony really didn't have an idea of a plot for this book as Bink is sent on a quest to discover the source of Xanth's magic so that he can be protected from any attacks on his life. Really, it does not seem to have any point at all, but then this is a series that is generally aimed at a younger audience (and indeed I did read it as a teenager, and I am unlikely to read it again, since there are a lot of other books out there that I would rather read).

He does discover the source (after many varied encounters), and it is a demon with a strange name that is read as 'Xanth'. However the catch is that the demon is imprisoned against his will, and that Bink is thrown into a moral dilemma: keep the demon imprisoned and keep the magic in Xanth, or free the demon and destroy the magic. I guess this is something that we all face: do we act selfishly and hurt others, or do we act for the benefit of others and hurt ourselves. Bink decides on the second choice, however ends up convincing the demon to remain and keep the magic in Xanth. Things generally don't work out that way in life, but I guess all American (okay, most) books have to end with everything working out for everybody.