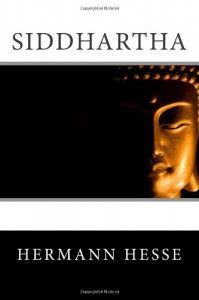 My first impression of this book was that it read a lot like Narcissus and Goldmund, but I can't really critique it for that because Narcissus was actually written after this book (by about eight years). However, having read Narcissus it felt as this thing book was pretty much going over the exact same ground and that there was really nothing all that new that came out of it. Well, come to think of it Siddhartha (who isn't the Buddha, but rather a character that just happens to have the Buddha's birth name) does not lead the exact same life as does Goldmund, nor is he running around sleeping with as many women as he can encounter – he only sleeps with one, though she does happen to be a courtesan (which is basically a prostitute for people that happen to have lots of money, though we don't seem to get courtesans these days, well we do, we just call them escorts, though I much prefer the name courtesan – it is a lot more dignified).

Anyway, I did manage to read this book in Germany, even if it involved sitting at a heavy metal bar in Kolbenz for fifteen minutes (and a second bar which was rather boring, and then ironically, as I was walking back to the car I found another bar that looked really cool, but since I had already had two beers, and needed to get to Luxembourg before 11:00 pm, I wasn't able to pop in there for a beer – at least parts of the German motorways don't actually have a speedlimit, though they do recommend that you don't drive any faster than 130 kph, which quite a few people don't seem to bother with), since the rest of the six odd hours I was in Germany I was behind the wheel of a car (on the motorway of course) so I wasn't able to read it. At least I managed to time myself so I could say that I read this in Germany, but that is beside the point.

Anyway the book is about a guy named Siddhartha who sets out to find enlightenment, and begins by becoming a penniless beggar. This actually raises the question (I was going to say 'beggars the question' but I thought that might be a bit too lame) as to whether such a person could actually survive in modern Australia (or even Europe, though I actually haven't seen as many beggars here than I have seen on the streets of Melbourne, but I will be hitting London in less than a month so that is probably going to change a lot) as a religious beggar. I've seen it in Thailand where the Buddhist Monks literally survive on the goodwill of the people, and in fact monks get a short cut through passport control (I wonder if all you need is to be wearing one of those yellow garments), yet I suspect that this wouldn't actually work in the European world. In fact, I highly doubt that any of the beggars on the streets of our major cities are actually doing it to seek enlightenment, and if they did they would most likely be competing with all the other beggars who are trying to raise enough money for their next score.

However, that is the thing with Buddhism, or in fact any religion, in our Western world – it is considered quaint. I invented a term back in my university days called a 'Christo-Buddhist'. They are basically people of European stock that think Buddhism is cool, and even have a Buddhist statue in their house, but they have no idea what Buddhism is actually about. When I visited the Tiger Temple in Thailand we were told that a lot of Westerners come over to volunteer in the temple, thinking that Buddhism is really cool, but when they discover that Buddhism involves no sex, no alcohol, and basically a bowl of rice every day for food, they pretty quickly become disenchanted and return home to their hedonistic lifestyle – so much for seeking enlightenment.

Yet this is what ends up happening to Siddhartha. He spends time as a beggar, and then meets up with the Buddha himself, but decides that enlightenment doesn't come about through following a teacher but through discovering it for oneself – which I have to admit actually has a ring of truth to it – there are many people who join up with a religious movement that end up becoming nothing more than sheep. They discover a teacher that sounds really cool and end up following the teacher and in then end sign over all their wealth and commit suicide because a flying saucer will be entering Earth's atmosphere and they can only be picked up when they are in their spiritual form – people can be so gullible at times.

I guess that is why when people came to Jesus and said that they wanted to follow him Jesus was actually right down the line and basically said that if they wanted to follow him then they had to basically give up everything. In fact people who were confronted with this stark truth ended up turning away because even though they believed that Jesus had the answer to the meaning of life, the sacrifices that needed to be made to reach that understanding were simply not worth it – materialism in the end got in the way.

Siddhartha does end up going down the materialist route however due to his time as a beggar it doesn't seem to entrap him as much as it does others – such as his son. In a way many of us who have grown up in a wealthy lifestyle become addicted to that lifestyle. This is why it has been suggested that the people of the Great Depression, who were the parents of the Baby Boomers, were much more frugal than today's generation. In fact the Baby Boomers, who had not experienced a recession, or even a depression or war, were trained by their parents to be frugal and to save (which is why the Baby Boomers are so wealthy). However, generation-X, and the Millenials, have pretty much had everything handed to them on a silver platter, and much like Siddhartha's son, react violently when it is suggested that all of these goodies are going to be taken away from them. We look at our parents and those of the older generations – those who could retire at 50 and live a comfortable life traveling the world – and demand that we have that as well, yet spend all their money on big houses and fancy cars. In the end, as Siddhartha discovered, comfort and wealth is in the end meaningless and doesn't bring about fulfillment. In fact for one to be able to reach enlightenment one needs to suffer because it is through suffering that one truly comes to understand the world. Living a life of wealth and luxury where insurance pays for all the mistakes that we might make ends up leading us in the wrong direction.