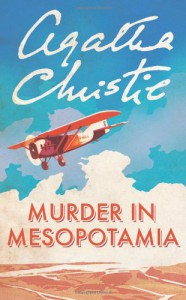 Well, now that I've learnt a little bit of French I have discovered that Poirot's little sayings make more sense (such as Eh Bein, which means ah good). Okay, it isn't as if the entire book is in French, or that Christie overuses the phrases, but for some reason, until I actually started studying the language Poirot's occasional outbursts were a little meaningless (despite the fact that most of the time logic should probably dictate what those words actually mean, though for some reason when it comes to language logic seems, at times, to get thrown out of the window and we simply close our minds to the fact that while something may be written in another language, it doesn't necessarily mean that we are not able to understand it).

Anyway, this mystery is set in Mesopotamia, or as it is now known – Iraq (which I believe is what it was called back then), at an archaeological site. Mind you, this isn't the Iraq of today, with insurgents running around insisting that everybody follow their own totalitarian rule on pain of death (but then again isn't that what most governments do anyway), and bombs going off everywhere. No, Iraq in Christie's day was actually a lot more peaceful to the point that archaeologists descended upon the country in an effort to uncover the past (and to also ship numerous objects, including the walls of Ninevah, back to Europe). In fact Christie was an amateur archaeologist (and being a very successful author meant that she was able to participate in such projects without worrying about the need for funding). Here is a photo of her at a dig at Nippur: As such it is not surprising that we find a murder mystery occurring near a dig somewhere in Iraq. However, like the other mysteries that I have read, this one follows a similar pattern – the entire action occurs within a place that is effectively separated from the rest of the world, and the suspects are limited to the few that happen to have been in the compound at the time (as is always the case). Mind you, this does actually make for a rather enthralling murder mystery, especially when everybody in the compound has a reason to kill the victim (and the answer is never as straight forward as one suspects to be the case). However, there are a couple of clues that are left, particularly when Poirot suggests that once a murderer, always a murderer – or more precisely, it gets easier after the first one.

I've probably suggested this before, but real life murders never actually come out as they do in an Agatha Christie novel. Usually the suspect is known to the person, and they don't actually go out of their way to cover up their involvement. In reality the police tend to have a pretty good suspicion, it really comes down to actually getting the evidence to make the charges stick (and even Poirot admits here that while he may have worked out the mystery, he doesn't actually have any hard evidence to prove his case).

Mind you, in this particular instance, and in some of other other books that I have read, the murderer was also known to the victim.

However, real murders generally aren't performed in the way that they are performed in these books. They are either crimes of passion (and in these cases there is actually no mystery to solve, the police simply have to collect the evidence, and make sure that the evidence that has been collected is then admissible in court – which means not breaking the chain). Then there is the mob hit, which in some cases, probably go unsolved for a very long time because we are dealing with professional killers that know how not to get caught (leaving the body in the boot of the car means that there actually isn't a crime scene). Still I'm probably going a little bit to deep on this aspect because, well, it is an Agatha Christie novel and it is more about the mystery than actually trying to re-create a real murder – that is what True Crime is for. So, instead, here is a picture of Bagdad from the 1930s: 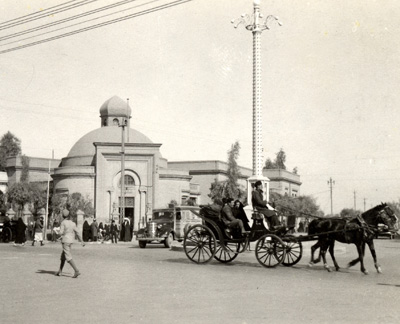 It sure does look a lot more peaceful than the Bagdad of today (though I wouldn't be surprised if it is nowhere near as bad as the media portrays).

Anyway, I want to finish off with a quote from the end of the book:

You would have made a good archelologist, M. Poirot. You have the gift of re-creating the past.