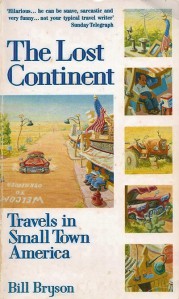 This wouldn't be the first travelogue that I have read, and in fact it would hardly be the first of its kind (but then considering that the Book of Ecclesiastes says 'there is nothing new under the sun' this is not surprising). In fact, in the ancient and early modern times this is how travelogues were actually written, namely as a story of somebody who is travelling around and visiting the various places themselves. I guess in the more mechanical and scientific 19th and 20th centuries travelogues morphed into the Lonely Planet guides that we have today. Hey, don't get me wrong, Lonely Planet Guides are very practical, and as I have discovered, quite useful when travelling around a foreign city (or even looking for things to do in your own backyard) but I would hardly call them entertaining (though they have become somewhat obsolete in the age of social media).

Bill Bryson certainly is entertaining, even though this is the first book of his that I have read. Actually, I think that it is one of the first books that he actually wrote, because before that I believe he was mostly writing articles for some newspaper in England. It wasn't until 1995 (at least according to Wikipedia, if you can believe anything that actually comes out of that site) that his first popular book, Notes from a Small Island, hit the shelves, which suggests that this particular book somehow slipped under the radar for a while.

Not that it is actually a popular book, if you take the opinion's of the American's into account. Mind you, Booklikes gives it an average rating of three and a half stars, which is pretty good (since Booklikes is out of 5). However, on one blog (and this blog went by a title along the lines of 'a quite contemplation while living in the end times' and included some Bible verse from Thessalonians, or some passage like that - I can't remember it, and I can't be bothered looking for it). Anyway, it was clear that this particular person was an American because she opened her commentary with 'I so very much wanted to like this book, but I got to page 8 and I had to put it down – he had nothing good to say about anything (and then proceeds to list a bunch of things that relate to the United States of America that I actually struggle to find anything good about).

I can understand this particular American taking offence at Bryson's take on the country because there was a time that I actually liked the Simpson, in fact I loved the Simpsons with the exception of two episodes, one being the one where they have the Barbershop Quartet: I was quite repulsed by the scene where they dump Chief Wiggan in the middle of the forest (suggesting that it is okay to dump unwanted dogs), and the second one was when they went to Australia. I found that that their version of Australia was so off the mark, and that the Simpons behaved so much like a bunch of disrespectful, well, Americans, that it was bordering on, no let me rephrase that, it was incredibly offensive.

The difference between Bill Bryson and the Simpsons portrayal of Australia is twofold. First of all Bill Bryson is an American, and secondly this story is a story of his return to the United States after a twenty year absence to see how things had changed, and the feeling that you get from this particular book is that they have changed, and in fact they have changed a lot. Bryson practically travels all over the continental United States, and visits many and various places, some of them famous (such as the Grand Canyon) and some of them not so famous (such as Walls Drug Store). All the while he is describing his emotions, his feelings, and his frustrations as he crosses this vast continent (and that is something that I pick up a lot, that it is actually quite vast, and empty). All the while he is providing some quite insightful commentary on what he sees as the American way of life.

For instance, his disdain of the motor home, or recreational vehicle. He describes it as simply bringing your home along with you, and all the comforts of home, without having to experience any discomfort. Look, in many cases it is either the motor home, or it is the motel, and if you are doing a lot of travelling, the motor home will end up being cheaper. However, I probably fall more onto Byrson's side with the motel room (and the ceremonial opening of the toilet) and driving around in a not too big vehicle. I have actually done something like that here in Australia (and I must tell you about it sometime) when my brother and I jumped into my sister's car and went for a drive around the East Coast of Australia, all the way up to Noosa, and then back inland to Adelaide. We were going to do the same thing with Europe, but my Dad made me book ahead and plan the entire holiday.

Well, it seems like I have been writing for about twenty to thirty minutes and not actually said all that much on this book, but I guess you can get the gist of it from reading by meandering, about the place, commentary. However, there are others who have also liked it, so I am not the lone voice in the wilderness here. So I think I will finish it off here, go and return some utter rubbish to the local library (not this book, remember, I did give it a nine) and then go and do something else (maybe apply for a real job, or continue writing about my third trip overseas because, well, I can – write that is).