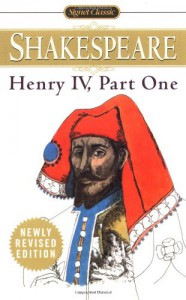 Thank God for Youtube. As I have said before reading a Shakespearian play that I have not seen on either stage or screen can be a difficult task at best. In fact reading any play that I have not seen on stage or screen can be difficult, since they are generally not meant to be read but performed. The printed plays seem to supplement the performances rather than to take their place, so when I came to read this play I searched Youtube and discovered that the BBC versions of the history plays are available for viewing, so once I finished this play I ended up watching it and I must say that it really added to my appreciation of the play.

Henry IV Part One comes immediately after Richard II and begins after a slip of the tongue in anger in which Henry Bollingbrook (now Henry IV) causes the death of the previous monarch Richard II. Remember, during this period of English history England was in the middle of the Hundred Years War with France, and historians consider Henry (and Richard) to be weak kings during their reigns the war in France was not persued. However, England controlled a lot of French land at this time and keeping the peace in this land was difficult at best. At the beginning of the play Henry calls off an pilgrimage to the Holy Land (a crusade) to deal with some rebellions in Scotland and Wales (and I suspect that he never got to go on that pilgrimage).

The problem wasn't that Henry had usurped the throne (though his own inner guilt did have something to say in regards to this) but that he had to deal with rebellions in Scotland and Wales. His first decision ends up alienating his former friends because he decides not to seek the release of another Englishman namely because he had formed a marriage pact with Owen Gwendoler (more on him in a bit). As such these former friends end up rebelling against his rule and going over to his enemies.

There are also family problems as well because his son, Henry (who is to become Henry V) has fallen in with the tavern crowd (the Boars Head Tavern at Eastcheap which, unfortunately, is no longer there, though I do plan on going to Eastcheap when I am in London). I am not sure where Henry's castle is supposed to be, but if we know London, we know that Eastcheap is quite close to the Tower of London (in those days it wasn't a prison). The tavern crowd is run by the infamous Falstaff, one of the characters that seems to have obtained a legendary status in English Literature. While the plays in which he appears are not remembered, the character is. Falstaff is the fat, loud, cowardly, oaf that forms the comic relief of many a book and film (as well as this play) however he has a very important role here. While Owen Glendower has taken Henry's lords from him, Falstaff has taken is son, therefore Henry faces problems both in his position as a king and a rule as a father.

The robbery scene is very important as, while it seems to be only a minor part at the beginning, it has a very significant impact. Robbery, particularly armed robbery, is a very serious offence, and while today you may only land up in gaol (though I would not call that a particularly light sentence, especially since it can stain your character for life) in those days you would be executed. Basically the only reason Henry gets away with it is because he is the Prince of Wales. Even then there is a very serious father and son talk when he admits to his participation in the robbery (and it also appears that he does not implicate Falstaff, who would have been executed for the deed).

Act II, Scene IV is probably the longest, and the best, scene in the play in that it is the turning point for Hal's (the Prince) life. It begins with riotous merry making with Falstaff as the central figure, and ends with the sheriff coming in asking questions about the robbery. While Hal manages to keep the Sheriff off of Falstaff's back (and while the pickpocketing incident leads to a rather interesting result, with Falstaff claiming that bonds were stolen, only to realise that everybody knows they were simply records of what he owes) Hal ends up confessing to his father, and his father's act of mercy has Hal turn around and become the Prince of Wales. In the end he is on the battlefield, rebuking Falstaff for his tomfoolery, and becoming the hero by slaying Hotspur in single combat.

Owen Glendower was a Welsh rebel who was at war with the English during this period. I actually saw a documentary on Glendower and their suggestion was that it was during this time that Wales was transformed from being a wild and savage place to becoming that quaint place that we all associate with Wales today. It is similar to Scotland, with the place going from the wild and savage land of Macbeth and the Highlander, to the bagpipe playing centre of learning that produced the likes of Adam Smith.

In the same way that Richard III is demonised by Shakespeare, Glendower is also receives the same treatment. He his made to appear as a sorcerer in league with demonic forces, and that his victories against the English are not due to his skill as an insurgent but due to his dabbling in the occult. He only appears in a couple of scenes in the play, yet he the focus the part of the play that is not dominated by Falstaff. Where Falstaff has stolen the King's son, Gwendower has stolen the King's knights. However, in the same way that Henry brings order back to his family, he brings order back into the kingdom during the Battle of Shrewsberry, after which the play suddenly ends (obviously in anticipation for part 2).