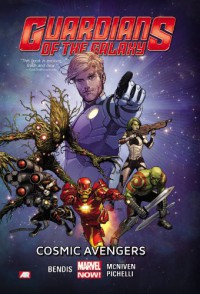 I'm not really a big fan of comics (unless they are Tintin, but that is another story) but since I have this gig where I get paid to write reviews (not much mind you, but then again writing doesn't turn all that much money, unless of course you're in advertising) and since everybody writes reviews on pubs, bars, cafes, and restaurants (as well as their local beauty salon) I decided that I would be my geeky self and go and review game stores and comic book shops. However, I can't just walk into a shop and then write a review, I have to buy something as well. After glancing over the endless shelves of comic books that I was not at all interested in I finally settled on Guardians of the Galaxy.

Anyway, for most of us when we hear about Guardians of the Galaxy we usually think about these guys:

Anyway, while the core characters of the film appear in the original comics (so I believe) as far as I am aware there are a lot more characters floating around. However, this particular series was released just prior to the movie, no doubt as a way to advertise the upcoming release. However, I must admit that I was quite disappointed in this offering. I really liked the cocky Peter Quill, aka Starlord, who has tickets on himself. In the film I was under the impression that he gave himself the name Starlord simply because it sounded really cool. However, this is not that Peter Quill in this comic. He wasn't kidnapped by aliens after his mother died, in fact it turns out that his mother had an affair with this galactic prince who then nicked off to continue to fight a space war, and Peter Quill is well aware of that fact. Also, he isn't kidnapped, but rather he joins NASA so as to attempt to get into space. Also you don't have Groot drinking from a fountain with Rocket Raccoon screaming “will you stop that Groot, that's disgusting”. Oh, you also have Iron Man who decided that he needed a holiday so he decided to travel into space (as you do).

Anyway, the five great powers of the galaxy get together because they realise that Earth is just way too powerful (namely because of all the superheros and X-men mutants that happen to be living there, though it makes me wonder why all these other planets don't have their X-men mutants and superheros as well) so something has to be done or else they will become a threat to the order that has been established (not that there is actually any order since these five great powers are fighting amongst themselves). However, the representative of Asgard (who isn't Thor) steps in and says “over my dead body” so they decide proclaim that Earth is to be left alone. Of course the proclamation applies to everybody except for the Badoon, who basically ignore it and go and attack Earth. Also, as Peter Quill's father is involved in the proclamation, he suspects something fishy is going on so decides to go and protect Earth anyway.

Guardians of the Galaxy is basically the Avengers in space. In fact the title of this graphic novel declares it as such. What they have done with this series of comics is to extend the Marvel Universe off from Earth (and from places like Asgard as well) and to develop the interstellar conflicts, heroes, and villains. Mind you, this is basically superhero stuff, so when the Guardians go off an fight somebody it isn't in fighter jets like Star Wars, or huge battleships blasting away at each other, but rather them jumping into their spacesuits, flying out into space, and going manno-a-manno with the baddies (who are all locked safely away in their spaceships – not that that helps all that much because they are the Guardians of the Galaxy). This sort of didn't wash with me all that well. Still, I do have a couple more to read (since I did have to buy something when I was in that comic book store).

At least they have Groot crying “I am Groot!”.