The life of a heroin addict 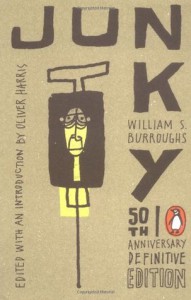 When I first bought this book I thought it was written by the same guy that wrote Tarzan (yes they have the same last name, but that is about it). It turns out that it wasn't, and Burroughs was not a fiction writer, but rather, as the introduction to the version that I read, the father of the beat generation. However, one does wonder how he ended up becoming a writer because from reading this book one wonders how he ever actually amounted to anything.

Junky is not a book that glamourises drug taking, in fact it is completely the opposite. It does not necessarily say that drugs are bad, but this is the impression that one is left with as one travels with the author through his drug induced haze. It is much better than Diary of a Drug Fiend where the conclusion was that one needs to have the will power to master the drug. Burroughs seems to be under no illusion whatsoever about the mastery that junk had over his life.

The book appears to be an autobiography and follows his descent into the drug underworld, and throughout the book we learn of the lifestyle of the homeless and vagrants in 1950's America. In fact, it does not paint a pretty picture at all. From the art of Lush Working (where one steals money from sleeping drunks) on the Subways of New York to the drug scene in Mexico City, one is left with an uncomfortable feeling that to fall into these cracks is very easy, but to escape is completely the opposite.

This is a book about addiction, in particular heroin addiction. The junkies don't just use heroin, but also seek out all of the derivatives as well. It is just that heroin, to them, is the best hit. One of his descriptions is how heroin changes you on a cellular level. This has been confirmed medically in that if you take opioids as a pain killer you can never go back to the weaker stuff. Once you have taken heroin, once you have become addicted to Junk, then you are never going to be the same again. Once a junky, always a junky. He tells of how hard you may try to get away from the scene, but the scene simply does not let you get away. He speaks about the dealer Old Ike, who is always lurking just around the corner, waiting to tempt you back into the world that you are trying to escape from.

What he spends a lot of time talking about though is what he calls Junk Sickeness: that is withdrawal symptoms. It is true when he says that there is nothing like it; many of the drugs that are used these days are not physically addictive like Heroin, they are psychologically addictive. They introduce something into your mind, a pleasure sensation that you must have more of, however go off of it for a couple of days and you can function normally, and even in some cases you can simply walk away from the scene. Not so with junk, to withdrawal from it leaves you sick, leaves you incapacitated, and you must have more to feel better. The author at one stage tries to numb the sickness with alcohol, but to no real effect (in fact he almost killed himself).

The final thing I wish to point out is how one's life becomes dominated by the junk. One is not interested in anything but getting junk, being on junk, and getting money for the junk. There are characters in the book who have regular jobs, but they don't last long because either they steal money for the junk, or get arrested for possession of junk and thrown into gaol. We are told that there is simply no interest in anything, not even sex or food. It is only after a few days that one gets ones appetite back. He also describes that the longer one stays on it, the worse the junk sickness becomes, and the book climaxes in Mexico City, a place where the junk flows free, but with it comes the worst experience of the sickness he describes.

As mentioned, this book does not glamorise the drug scene, far from it. In fact, if this book stops one person (hopefully a lot more) from going down that road, then this is definitely one book worth reading.