A failed attempt to write a poem about dinosaurs 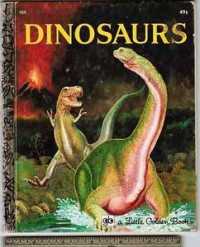 I guess what I did not like about this book was that the author seems to jump in and out of poetic form which makes reading it a really pain. At one point she seems to be using rhyme and meter and all of the sudden she will break the flow and destroy the nature of the paragraph. Okay, I will admit that writing a pseudo-scientific children's book about dinosaurs in poetic form is going to be very hard indeed, but it seems that that is how she started out, but found it too difficult, so just stopped. However, it is more that she seems to jump into and out of poetic form that makes it so painful to read.

The thing with regards to dinosaurs though is that they are a complete mystery. We know they existed due to the bones that we have discovered, however what is interesting is that I suspect the ancients knew about them as well. The reason I say that is because of the legends of dragons and monsters than have come down to us. What we have in relation to the dinosaurs, and the theories that we hold, is mere speculation based upon supposition.

I am not a seven day creationist, but then again I am not a fundamentalist evolutionist either. In answer to the question of 'what about the dinosaurs' my response would be 'dinosaurs are cool – I have always loved dinosaurs, especially when I was a kid, but as to any facts about them, all I can say is that they existed'. Me, I like to believe that dinosaurs and humans actually inhabited the Earth at the same time, but it is not something for which I am going to give up my life. I like dinosaurs, and I like the idea of a world were dinosaurs and humans co-existed, however I do not believe that there is any hard proof that supports either my position, or the position of the general scientific community (just because a bulk of the scientists believe something does not necessarily make it true).