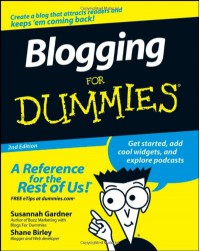 Sometimes I am a little hesitant reading a book with the words 'for Dummies' or 'complete idiots guide to' in the title because it makes me feel like, well, a complete idiot. It is probably because I like to think of myself as intelligent and take offence at being called otherwise. However, sometimes the most intelligent thing to do is to admit that you don't know anything and then go and learn about it. So, after a couple of people suggested that I start up a blog I decided to grab what appeared to be the simplest, most straight forward, and most exhaustive book on blogging available. As it turned out, this was the book (and the fact that I borrowed it from the library also helped).

Now, when I suggested to somebody that I did not want to start a blog until I read up on it they thought I was, well, an idiot because as far as they were concerned you didn't need to read a book to learn how to blog: you simply went ahead an did it. However, as I said previously, sometimes the most intelligent thing to do is to admit that you know absolutely nothing and then go out and learn how to do it, and in a way I am glad that I did.

So, what did I learn from this book? Well, most importantly there is this idea called bandwidth stealing, and it is something that I suspect goes on a little too much on some websites. The reason I say that is because bandwidth stealing is where you embed something (usually a picture) onto your website from somebody else's website. Now, when it comes to pictures on some websites, it seems that you are only able to embed the picture from outside of the site, and as such it makes it difficult, especially if you do not have a website to store pictures, not to steal bandwidth. Videos are not a problem because Youtube allows you to embed the videos from their site (they even provide you with the code to embed the videos) but pictures, it appears, are a little trickier.

The other interesting thing is copyright. Okay, we all know (or I hope we all know) that we are not supposed to plagiarise, that is copy somebody's work word for word and pass it off as your own. Sometimes it can be pretty blatant, other times, especially if the work that you are plagiarising is not that well known, not so much. Then there are pictures. Sometimes I wonder how many of us are actually sourcing the pictures that we are using, and whether we are taking care to note whether they are protected by copyright, or whether they are available in the commons (and even giving credit where credit is due). I am sure that a number of the pictures that I use aren't available as such, so I am now checking the pictures before posting them (as well as attempting to find a site from which to embed them from).

Another thing that I have learnt is about advertising. While it is a great way to make extra money from your blog, it won't make you incredibly wealthy, or even financially independent. You need to go further than that (such as selling your ability to write and create blogs). However, you do need to be careful, since the whole idea of creating a successful blog is to create great content to generate traffic (which you then sell to advertisers), because if you don't sell advertising correctly (such as selling text links without hiding them from the Google search engine) it could have an adverse effect upon your blog. The idea of increasing your Google search rankings involves having links coming into your webpage, but if you sell these links, and Google catches you, then they could end up blacklisting you (namely because it artificially inflates your rankings, and it appears, at least at the time, Google did not want the search rankings to be defined by the size of the owner's wallet).

Now, as for blogs. Well, I am sure we all know what blogs are so I probably don't need to go into any detail. However what I have discovered is how pervasive they really are. In a sense you can divide the internet into two basic sections, and that is the commercial web and the social web, and in many cases the two intersect (for instance where a business sets up a blog to generate extra revenue). The way I see it though, if the website is not entirely focused on selling stuff, such as:

then it is part of the social media. There are probably some sites that you are quite familiar with, such as:

which are websites that are pretty much dedicated to the social media, though Facebook seems to be all encompassing while Booklikes is primarily focused on reading books. However, both of these sites are blogs in their own way. As a side note, there was an entire section (or minibook) on Twitter, which made me wonder what it's use actually was, considering Facebook does everything that Twitter does, only better. In fact Twitter simply seems to be restricted to status updates, whereas Facebook is so much more. Still, people use it, and use it a lot, so maybe there is some use in it (and it also seems to be growing as well).

Blogs, though, seem to exist in a world of their own, in that they can be about almost anything. What probably makes blogs better than Facebook is that you have a lot more control over presentations (meaning you don't get these sudden changes by the website that everybody hates – such as the dreaded timeline), and you don't need to sign in to be able to read the content. In a way a blog, to me, seems to be what the old printed media was, this time with much, much lower barriers to entry (meaning that you don't need to print hundreds of thousands of copies to be able to reach a large readership). It is not just the development of the internet as a whole, but the development of the blog, that has brought about the death knell of the traditional newspapers. Just take a look at the price range of Fairfax Media over the last ten years to see the impact on a traditional newspaper company. Even though they have created websites they still struggle to survive, and even though they encircle their sites with paywalls, people simply do not want to pay for something that they can get for free.

The web has also given voices to people who originally did not have as much of a voice. The traditional newspapers tend to be right-wing in origin, and only socialists standing on street corners attempting to flog off their own interpretation of current events (and I must admit that their ability to write a newspaper does have a lot to be desired – even though they simply happen to be preaching to the converted) were able to counter that. However, with the development of the internet we suddenly have the centre left The Guardian creating a presence in Australia, as well as The Australian Independent Media Network. It is not just in Australia, because in England we have Another Angry Voice and in the United States we have I Acknowledge, and these are just a handful of left wing political blogs that I have discovered.

However, you may be thinking that blogs are all about politics, media, and current events, when in reality they are much, much more than that. In fact blogs can be about absolutely anything. For instance we have blogs about knitting, gardening, and even basketweaving. So, when it comes to starting up a blog, your imagination is pretty much the limit (though don't expect to become an overnight sensation because you will be up against some stiff competition, especially considering that are over 50 gardening blogs out there, if the search result 'top 50 gardening blogs' is anything to go by).