Failures of the American Army 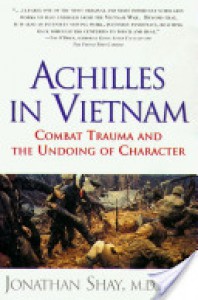 This is one of the toughest books that I have read to date and pretty much halfway through the chapter on grief I found that my brain had been reduced to slush. Now, I have never been to war and never experienced war, but when Shay says in his introduction that this book will have a tendency to bring flashbacks to combat veterans he was not kidding. As I suggested, I am not a combat veteran and I found this book very hard going myself, and in a way, reading this book also brought about flashbacks from my past, and I would hardly say that I suffer from PTSD or have had a hard life compared to many others in our society.

Jonathan Shay is a psychiatrist that works with Vietnam vets helping them cope with civilian life and helping them (I feel that the word recover would be an inappropriate word since there are some things that one can never recover from, such as an amputation, and some psychological trauma simply cannot be healed) live with the psychological trauma that is likely to be with them for the rest of their lives. When somebody once coined the phrase (I cannot remember who it was but I believe it was some American General in World War II) War is Hell, he wasn't kidding, and the testimonies that we are told from the Vietnam Vets who had agreed shared their stories go a long way to demonstrate this.

As I read through this book the nagging feeling that kept gnawing away at me was whether the United States, in the way that they run their army as one would run a corporation, can really expect to be able to win a modern war. The way the army is constructed may be able to win a war where two nations throw armies up against each other, such as what happened in World War II, and even in Korea, but when the war that one is fighting is against insurgents who continually melt back into the civilian population, then the way one fights a war and constructs the armed forces, may need to be reviewed. An army is not a police force and a police force is not an army, and the Americans discovered that when they attempted to use the national guard to attempt to put down anti-Vietnam protests in the United States. The role of the police is to protect the order of society and to thoroughly investigate crimes to make sure that the real perpetrator is arrested. However, the job of an army is to defeat the enemy: in effect to shoot first and ask questions later.

One of the problems that Shay has pointed out, and this is something that is not new because this is the way wars have been evolving over the last half a millennium, is that the commanders are becoming more and more removed from the battlefield, to a point where they do not see that action and do not understand the nature of war. Von Clausewitz indicated this in his book 'On War' when he talks about the concept of the fog of war. The best way to describe this is that what may look good on paper does not necessarily work on the ground. It should be interesting to note that when a general actually joins the troops and leads the troops (as opposed to directing the troops from a bunker behind the lines, or even thousands of miles away) the effectiveness of the army actually increases, and we only need to look at Napoleon's successes to be able to see that.

However the nature of war has changed a lot since Napoleon's day. As technology advances we continually distance ourselves more and more from the enemy, to the point where it is almost becoming like a computer game. Shay talks about how the modern Judeo-Christian ethic seeks to demonise the enemy to make the enemy easier to kill. To some people it is easier to kill a dog than a human because the dog is not a human, so to get over humanity's resistance to killing another human, we turn the enemy into an animal. However, the opposite also works true in that by turning the soldier into an animal the human loses all concept of their humanity and becomes like the animal. Of course, the problem that arises is that the human can no longer return to human society, a concept that is explored elsewhere.

I particularly appreciated his discussion of the way troops were trained. One particular movie that I have seen about the Vietnam war clearly brings this idea out (the movie is Full Metal Jacket) and that is where the trainer (and in cases commanders) are constantly focusing on where the person is failing rather than their successes. The belief is that by constantly denigrating the soldier it forces the soldier to overcome his or her weaknesses and thus becomes a better soldier. This is not the case (and I shall explore this when I discuss the nature of warfare and the corporation below). In Full Metal Jacket, the poorest performer in the group ends up shooting himself in the toilet, and we learn from this book that this is not as far fetched as it seems. We are told the story of a helicopter pilot that was torn to pieces for refusing to do something, then going out and killing himself.

Shay refers a lot to the Illiad in this book, and uses the story to show us what war is about. There are a lot of differences, but there is also a lot of insight into the effect of war upon the individual. Remember, in the ancient world, all males were warriors so all males had experienced war. Tragedy was a way to help the citizens to cope with returning to civilian life. Also, we note, that the main characters in the Illiad are all commanders, and they are all involved in the fighting. This is not the case today. Where the commanders in the Illiad knew what it was like on the ground, the commanders today do not. As such, the orders that are passed down come from people, in many cases who have not seen or experienced action, and expect the soldiers to obey them. I remember when I explored a military position after completing university, I discovered that I could walk into the army at the rank of major, which meant that I would never have to see combat action, and with my law degree, I would be dealing with people who had seen action with no understanding of what it would have been like to have been out there. Fighting a war on the ground requires quick thinking and a willingness to do things on the spur of the moment, however the chain of command does not allow the soldier to do this. The soldier must obey his commanding officer, and any deviation from that is punishable. They say that the back bone of the American Army is the chain of command, and by ignoring the chain of command will undermine the army. However, as we have seen in Vietnam, and more recently, in Iraq, it was the chain of command that proved to be the armies undoing.

Now, I will speak of the idea of the corporation as the army. Having worked in the corporation, I have seem many elements that have come out of the book. We take the idea of the manager as the commander. When you are on the floor, you may be exposed to direct customer contact, and in some positions that can be really draining. However, the higher up the managerial chain, the less customer contact you have. However the higher up you go, the more you are expected to have the people beneath you perform to a high standard. If the people beneath you fail, you fail. However, consider an irate customer screaming at you, and you are not permitted to terminate the call because the customer is everything. The customer pays the company money, and it is expected that the customer continue to pay the company money, however it is not the manager's job to take the call. The company has upset the customer, however the person on the floor is expected to resolve the complaint, and sometimes, even to convince the customer to upgrade their services. In some companies (McDonalds for instance) the managers are expected to be on the floor and to deal with customers alongside the staff, however many others do not.

I have also seen instances where beratting employees with the belief that that creates a better employee is used. This, once again, is not the case. Granted, if an employee that makes a mistake is not shown the mistake, then the employee is not going to learn. However, by constantly hammering the employee for their mistakes, without actually acknowledging what the employee has done right, and rewarding the employee for what they are doing right, will end up destroying the employee. The same goes with religious institutions. We get so caught up with trying to create better people by hammering them for their mistakes, that we actually are blind to the damage that is being done to that person.