A Story of a Man and his Barrel When I was up at my parent's house I saw this book sitting in my Dad's workshop, so being somewhat intrigued I borrowed it. The thing is that I like the concept of the cynic, and I also liked the concept of Diogenes, who in some way is a homeless beggar, but he is also a philosopher. However, after reading a few pages of this book I also came to realise that despite him being a homeless beggar, he is also an exhibitionist. In a way he argues against the conventions of society, and the imprisoning nature of wealth and luxury, but he also lives and behaves as if he is an animal, which a part of me feels undermines that part of us by which we call ourselves human.

The thing with Diogenes is that, as I mentioned, he was a homeless beggar, but not by circumstance but rather by choice. Here is a painting of him sitting in his barrel: 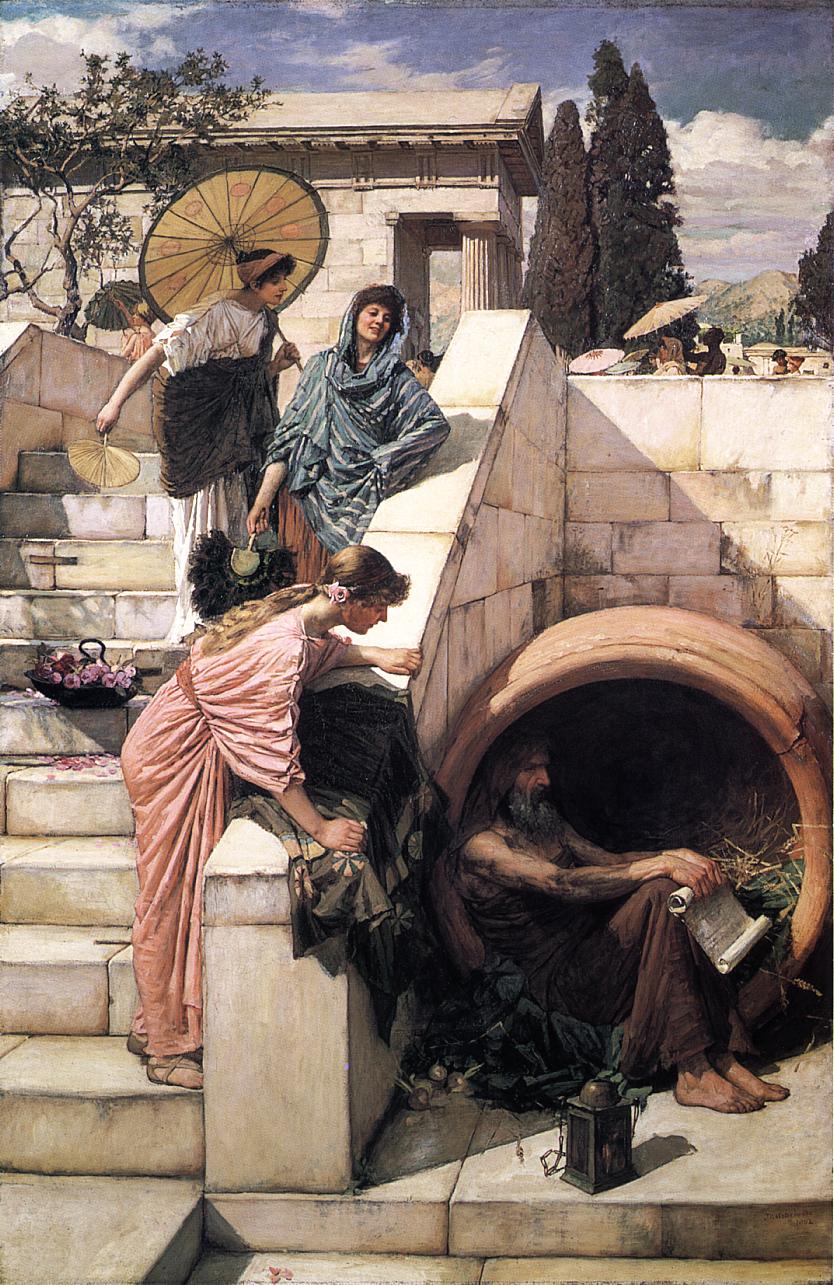 The interesting thing is the idea of him being a cynic. In my mind we have the optimist, who sees the glass half full, the pessimist who sees it as being half empty, and the cynic, who basically makes the statement that no matter how much water you drink you are only going to be thirsty again so you might as well just throw the water back into the river and simply remain thirsty. Okay, maybe that is a bit of an extreme, but in some ways taking the mind of a cynic is actually quite beneficial as it enables us to see through the fabrication that is society.

The interesting thing is that despite the fact that he was poor, and lived in a barrel, he was still a famous philosopher. I suspect that it had something to do not so much with the fact he was poor – there were lots of poor people in Athens – but rather that he was an exhibitionist. Also, he had some pretty harsh things to say about society, but despite the fact that he did say some pretty harsh things he still ended up building up a bit of a following. However, like a lot of people who build up a following, while what he says may sound good in principle, when it comes to putting things into practice then people will suddenly turn around and go back to doing what they were always doing.

In a sense there seems to be some similarities between Christ and Diogenes, in that both of them not only walked out of a comfortable life to become itinerant preachers, but they also have a lot to say about wealth, greed, and conforming with society. However Diogenes, unlike Christ, had a much more naturalistic approach. In a sense Diogenes saw us as little more than sophisticated animals, and the fact that despite our perceived civilisation we still basically behaved like animals, we might as well cast off our trappings of civilisation and simply become animals.

This book contains a series of anecdotes, that is sayings that have come down to us about Diogenes. The thing is that while Diogenes did actually write some stuff, we don't have anything remaining, so all we have are these anecdotes, sayings that are attributed to Diogenes, but not necessarily having any real truth about them. In fact all that we seem to have is a story about this guy that lived in a barrel in Athens, that eschewed wealth and comfort, and simply went around challenging people and their lifestyles. For instance it is said that he walked into a rich man's house, and because you couldn't spit on any surface in the house, he chose instead to spit into the face of the rich man.

These itinerant beggars are actually quite fascinating because we don't seem to actually have people like that these days. Okay, we might just do, with people who seem to drift from house to house, taking food and looking for a place to sleep, and then moving onto the next house and the next house, without actually paying their way. I remember a time when I was young that this Vietnam Vet appeared at our door looking for somebody who was no longer living there, stayed with us for a couple of days making all these promises, heading off with one of our friends, and then disappearing. My friends all referred to him as a conman, but he never took anything from us – he simply spent a couple of nights at our house and then moved onto the next one.

However I wander through the city and see all these homeless people sitting on the street with signs asking for money, yet none of them seems to stand on the corner sprouting philosophy. You do get people doing that, normally waving an issue of Red Flag (which is a communist newsletter) around, but they all look reasonably well groomed, and they are definitely not dressed like a beggar. Mind you, while we all talk about how Diogenes eschewed a wealthy lifestyle, and money and possessions, we still notice that he begs, and even asks for money off of his pupils. This makes me wonder if he actually has fully done away with money, or possessions. The fact that he owns clothes, and even owns a barrel, goes to show that he does have some possessions.

Anyway, I will finish off with another picture, and this time one of him speaking to Alexander the Great. It was said (as is the case with everything about Diogenes' life) that when Alexander asked who his king was, Diogenes says that he had no king because he was a citizen of the world, that is cosmopolitan. As such, Alexander realised that it was not enough to simply conquer Greece, but that he had to conquer the world, which is what he did. The other thing was that it was suggested that Alexander either takes everything, and thus becomes king, or takes nothing, and thus becomes Diogenes. In the end it would have been better that there were two Diogenes than two Alexanders, because to have two Alexanders would have not only been insufferable, but would have split the world asunder. 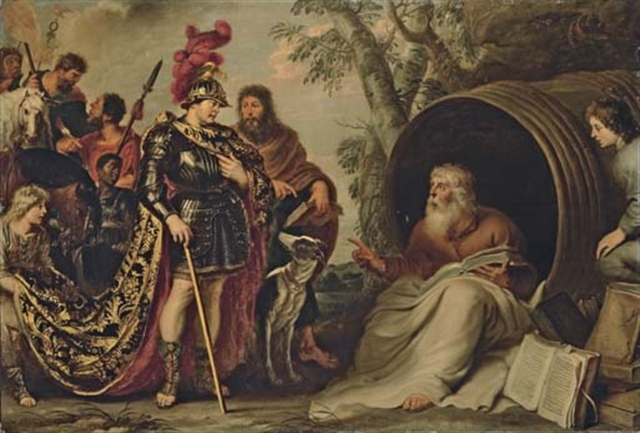