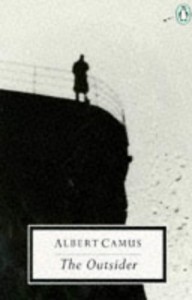 When I was a lot younger one of my favourite bands was The Cure. I remember sitting in my lounge room with my friends with The Cures greatest hits ablum blaring out and as soon as the tape came to an end I would jump up, and immediately flick it over onto the otherside, and press play before my neighbour would cut in and throw Sergeant Peppers on so as to break the monotony. One of the songs that I remember clearly was 'Killing an Arab', though I have to admit that I had no idea what it was about. Actually, I thought I knew what it was about, but in reality I didn't because, well, I hadn't even hear of Albert Camus, let along L'Etranger (I even played it in the lead up to the gulf war in protest against it – once again having no idea what it was about).

Sure, I might have thought that it was some criticism of the Middle East crisis, even though it was pretty relevant when the Gulf War flared up, especially how the Arab that is killed halfway through the book is and remains nameless (as do all of the other Arabs in the story), however what I didn't realise was that this one song is actually about that event upon which the entire book turns – the murder, in cold blood no less, of an Arab on the beach. Sure, one could argue that Meursalt was provoked, especially since there had been an ongoing tussle between Meursalt and his friends and these unnamed Arabs, but the thing is that Meursalt simply doesn't seem to feel any emotion. Okay, it does play out along the lines of him walking down the beach (with a gun in his hand nonetheless, though we must remember that the reason he took this gun was so that his friend didn't do anything stupid with it), and it is pretty hot – in fact it is so hot that he is suffering from heatstroke – when he comes across this Arab who pulls a knife on him, so he shoots him, thinks about it a bit, and then puts four more bullets into him just to make sure he is dead. He then wanders off pondering on how hot it is.

The problem that I find with this book is that Trevor has already written a review on Goodreads that so captures the essence of the book (and in fact it was his review that made me want to read the book, and also the fact that one seems to constantly come across references of an Arab being shot on the beach) that I feel that there is little, if anything, further that I can say. However, as I am apt to do, I feel that I would be wasting the time that I spent reading this book if I didn't actually write about it.

The thing about the book is in the title – The Stranger, The Outsider, or as it is in French L'Etranger. Before I started reading the book my thoughts were all about how it actually feels to be an outsider in society – sort of what I am like – being able to connect, but in a way not being able to connect. Okay, I would hardly consider myself an outsider in the vein of Meursalt, but being in part an introvert, and not having any real empathy about me (though I would have to say that I have little, if any, empathy for people who suffer from first world problems), I can sort of connect with him (though I'd hardly say I'm unempathetic – it's just that I don't have any empathy for people with first world problems). Mind you the thing that makes him an outsider is that he didn't cry at his mother's funeral. That to me doesn't really mean all that much because I'm sure that there are plenty of people out there that wouldn't cry, let alone attend, their mother's funeral (and not being a hugely tearful guy, I'm not sure if I would cry at my mother's funeral, though since my mother isn't dead yet I can't say whether that will be true or not – still I did cry at the end of King Lear).

Camus suggests that anybody who doesn't cry at their mother's funeral is condemned to death – though the truth is that we are all condemned to death (as the priest says at the end). It is interesting that Trevor suggests that we all assume that he is executed, yet the book never actually tells us that he was executed. In reality we don't know whether or not he will be, though from Camus' admission I suspect that he is. The thing is that it is not so much that he was executed because he killed the Arab – in fact I'm not entirely sure whether anybody actually cared, the only reason that he was put on trial was so that people could see that you can't really go around randomly shooting people. Rather, as Camus suggested, it had more to do with the fact that he refused to lie. He wasn't executed for murder he was executed for being honest.

That's the thing with honesty – it gets you into a lot of trouble. They say that honesty is the best policy, but I guarantee you that if you are honest then bad things are going to happen to you. In fact if you are honest you probably aren't going to have all that many friends: hi, how are you? Pretty crap. You see with that one question, everybody, except maybe with your closest friends, expects you to lie. You could feel pretty horrible, have had one of the most miserable days, but when somebody asks you how you are they don't want to hear the truth – in fact that it is the last thing that they want to hear. No, they want you to lie.

This brings me to the point of the trial – that is another place where honesty is certainly not going to get you anywhere. If you are up for murder and you are asked why you killed the victim, the wrong (even if it is true) answer would be 'because he/she deserved it, and if I had a chance I would do it again'. No, you are actually supposed to do the opposite – it was the heat of the moment, or whatever other excuse one can come up with. Mind you, it might be suggested that the whole idea of a trial is to get to the truth, but in reality it comes down to simply who can tell the better story, and who can impress the jury better.

Then there is the question of freedom. Meursalt is told that the reason he has lost his freedom is because he is being punished. But he doesn't seem to particularly care whether he can wander around outside or not. Okay, sure, he does go through some doubts, suggesting that he should have spent more time watching executions to see how one behaves in an execution, but in the end he realises that despite the fact that he is trapped in the cell, he still has his freedom. This realisation comes about when the chaplain finally comes in and tells him that since he is about to die then maybe he should confess to God. To Meursalt this is absurd – he doesn't believe in God, and it doesn't matter that he is facing the chopping block, he doesn't seem to see any particular reason why he should believe in God. It seems to be a part of this absurd idea where people, who are facing death, suddenly see that it might be a good idea to suddenly start believing in something that they have never believed in their entire life.

Okay, I'm not an atheist, so sometimes I find it hard to see the nature of this absurd world that writers like Camus explore, of if I do I see it through the eyes of a Christian. Mind you, the fact that I actually read this book as opposed to simply writing it off as another piece of humanist rubbish, as a lot of Christians are apt to do, probably says a lot more about the nature of my faith than what the general population generally consider Christians to be. That doesn't mean that I don't consider the world to be absurd and pointless at times – in many cases it is. However this absurdity comes into play very much in the Christian sphere. I have heard many of them run around claiming that God has a plan for our lives, and then start pulling out old Testament characters to prove it – yet to me this is absurd. What makes the Christian whom 'God has a plan for their lives' any different from the thousands, if not millions, of other Christians out there.

Anyway, I think I've waffled on enough, and probably should finish this off, especially since I do have to go to work tomorrow, and it already is getting pretty late.