Opens with the word 'Moocow' 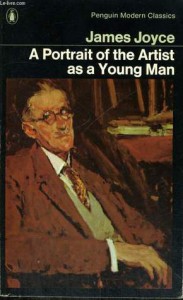 Well, here is a portrait of an artist as a young man: though I am not sure if that is the type of artist that Joyce was referring to when he wrote this book, so maybe this one would be a little better: yet considering that this book is semi-autobiographical maybe, just maybe, this would be a better one:

Unfortunately, I would hardly say that he is a young man in this particular painting, and since it wasn't until 1916 when he published A Portrait of an Artist to critical acclaim, though though would make him 28, which means that he wasn't all that old either, but then again, that was the only painting of him of wikipedia that I could find.

Anyway on to the book. I must say you've got to love a work of modern literature that opens as follows:

What the? I thought this book was considered a classic and he uses the word 'Moocow' not once, not twice, but three times! Seriously, if I tried writing a literary masterpiece and used the word moocow then I'd probably be laughed out of the publishing house.

Then again, apparently you can self publish anything on Amazon these days (not that I'm criticising self publishing because the publishing houses do have this annoying habit of rejecting works that go on to become best sellers – it is just that self publishing does not necessarily have the same quality control, but if you are like me, trying to find somebody who will be willing to edit your book is nigh impossible – actually, maybe it is just me).

Anyway, I find some books a little difficult to write about because the book itself simply engrosses you in the same way that a work of art draws you into it, and you are in a way left speechless. In a way words simply cannot describe how the book impacts you, and this is certainly one of those books. It is interesting how it is written though because it is not the standard third person narrative – Joyce tried that with his first draft (Stephen Hero – which ended up being scrapped) yet I cannot say that it is stream of consciousness either (though Joyce does use elements). Wikipedia says that the style is more a mix of third person narrative with free indirect speech though I would have to say that the style in itself differs from anything that I have read previously. Maybe that is why it comes in at third on the editors list of 20th Century great novels (and ironically Ulysses comes in at number one).

Well, the story itself is about a young man's, named Stephen Daedelus, which is a pseudonym for James Joyce (not that there is anything wrong with writing an autobiography that is not strictly an autobiography, but is in fact an autobiography – I know, I've tried it, not that I've published anything yet because, like a lot of writers, it isn't perfect – and probably never will be), journey through his teenage years attending a strict catholic school and how he decides to reject the priesthood and become a writer.

It is interesting because one of the most confronting parts of the novel is where he is at a school camp and is listening to a sermon on hell and is struck so much as to how horrible hell is that he immediately goes to confession and recants of his sins (and he had been a pretty sinful person up until that time). It is funny because after that first confession he immediately feels this sense of relief, which is almost like a drug, because when it begins to go away he then goes to confession again, and again, and again, to experience this feeling of 'forgiveness' (if that is what you call it). However, the more he goes to confession, the less the feeling comes about afterwards, to the point that he begins to wonder whether it is working anymore.

That really got me thinking because it does make me wonder whether this whole idea of divine forgiveness has drug like attributes because it does have some psychological effect upon you. The feeling of relief that you have when you realise that the sins of your past, and the guilt that you suffered, no longer holds you down can give you a really pleasurable rush, yet the more you seek that rush, the less fulfilling that rush becomes until such a time that it becomes part and parcel of life – however you cannot escape from it because your mind has latched onto this need for forgiveness that you continue to perform the rituals despite it not having the same effect.

Now, it is also interesting that Daedelus is then approached to join the priesthood, yet in his mind he is surprised that the priests seem to think that he is this worthy candidate. Daedelus knows that he is not worthy of such a post, yet others seem to think that he is. It makes me wonder about the whole selection process churches use to pick their leaders. Mind you, since I am a protestant I cannot comment on the Catholic Church, however leaders within the protestant church are generally selected by their 'godly' character, as well as their sociability. Not all protestant churches are like that, but I have been to some who seem to bring those who get along with people and are social butterflies into the leadership ranks, yet I have sometimes questioned whether the ethical character of some of these people warrant that. Mind you, there is no such thing as a perfectly ethical person, however there are times when a person who is unsuited to such a role is brought itnand the result can be a disaster. The reason I say that is because when you are a leader you suddenly have this respect – people look up to you, and that respect has a danger of going to people's heads, and if that happens there is a danger of a 'cult of personality' being created.

Then there is the use of the name Daedelus. Daedelus is an ancient Greek mythological figure who is famous for creating the labyrinth in Crete where the minotaur lived, a fake bull that was designed to lure a bull to have sex with a woman so that the minotaur could be created, and wings to enable him and his son Icarus to escape. The thing about Daedelus is that he was imprisoned by King Minos on Crete, which seems to reflect the feeling that Joyce found himself imprisoned in Ireland. Despite most (if not all) of his works being set in Ireland, he spent most of his life in self imposed exile. That is something I can relate to because Ireland had a lot of issues – it was ruled by the English and there were strong tensions between the Protestants and Catholics, and the Irish and the English. It was also pretty much a backwater, though had probably come some way since the potato famine. Still, this was the turn of the century, and despite the English having invested huge amounts of money in colonies such as Australia and India, Ireland was more like occupied territory where the inhabitants were kept in a state of subjugation and oppression, which resulted in an uprising during World War I.