Another rant about the failings of Corporate America 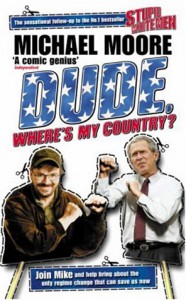 I am probably going to go down the same road as many of the other commentators on this book, namely that while Michael Moore does make some good points, it does not appear to be a properly researched and documented work. While his videos were amusing (at first) they end up becoming little more than some self-righteous rant at a political ideology that the author (and this particular reader) does not necessarily believe. In fact, the further down the track that Michael Moore goes the more that he begins to sound like some radical left-wing conspiracy theorist who jumps at shadows and makes unfounded allegations with no evidence whatsoever. In fact, there have been numerous allegations that he has also manipulated evidence and video footage to make his point more clear. In doing so he has undermined his integrity.

What I want to comment about on this book though is the idea of the 'Dead Peasant's Insurance'. Technically there actually isn't anything wrong with this concept namely because it is a company insuring against the loss of a productive worker. It is the nature of insurance to hedge against risk, and what can be riskier, and more costly, than the loss of a very productive worker. However, Moore seems to suggest that the only thing the company insures is the worker, meaning that if the worker dies, then the worker's family gets squat. So the worker should, because in reality the worker should be the one insuring himself and his family against his own loss of productivity, or income stream. However, the problem arises when the employer deducts the cost of the dead peasant's insurance from the worker's wage. This, to me, is wrong, because the worker should not be paying for the company to insure against his loss of productivity. It seems to be the way that the capitalist society works, that is if there is a cost incurred, then look for a way to externalise that cost, whether passing it onto the consumer or docking the employee's wage.

I am not necessarily convinced that the corporate world is really out to oppress us, namely because, as I have written before, the corporate world needs us to turn over their profits, and they need to put money into our pockets so that we might spend it. While one might suggest that once the country of origin has been sucked dry then they look elsewhere to suck everybody else dry, the truth is that the corporation has to keep producing stuff, and thus making money, if it is to survive. If you are forever sucking money out of a worker, the worker will get to the point where the worker can no longer afford luxuries and as such the economy suffers. Jack up the price of essentials, and while the producer of the essentials makes profit, the producers of the non-essentials suffer.

One of the criticisms that has been levelled against Moore is the fact that he manipulates video footage. One example was from his film 'Roger and Me'. He buys shares in General Motors to allow him access to the AGM, and at the AGM footage is shown of him trying to question the CEO and the CEO refusing to answer his questions. Apparently the CEO did answer his questions, but that did not make for a good movie, so he cut and pasted the footage to make it look otherwise. It may not seem to be the case from the film, until you either go to an AGM, or look at it from behind the scenes. For instance, the footage of Moore is shown in a dark room with a spotlight on him, and the video is filmed from the stage. However, it appears, if you look closely, nobody else is in the room, which is not the case when it comes to AGMs.

The other thing about that film is that it appears to be little more than a rant about how GM shut down a bunch of factories and put workers out of work. However, if the company is suffering a loss, it cannot expect to keep a loss making enterprise going just to keep people in work. In any case, it appeared that the workers were able to find work, even if it involved them moving elsewhere. The whole movie was about how people once out of work struggled to make ends meet. Look, that happens, and it is not good, but a company simply cannot pay people to do busy work, they have to be productive in someway or another so that the company makes a profit. Underpaying workers is a different story, as well as companies actively preventing good workers from leaving while underpaying them. They say that if you are not happy with your wage, then leave, but that is not as easy as it seems, especially if you have made mistakes, or have a horrid manager that will never say a good word about you. Hey, that is also a conspiracy theory, but never under estimate a company where profit is concerned.